Did you know things look different in space? It's true: beyond the out-of-this-world views, the eye itself is changed by the space environment. Microgravity-induced swelling in the head compresses the eye, worsening vision on long missions. 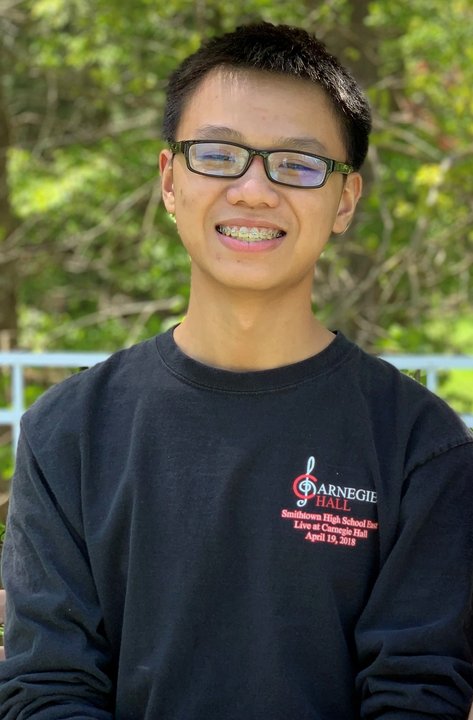 Researchers are now beginning to zoom in on the specific molecular changes that lead to vision loss in astronauts, and we asked 2019 Finalist Kevin Chen to brief us on their latest findings. Kevin had to become an expert in cell biology in space as he and his partner, Alexa Knee, prepared to present their proposal at the Genes in Space Finals.

Here, Kevin shares a recent paper by a research team lead by University of Washington researcher Eliah Overbey. The team uses molecular tools to offer us a glimpse inside the eyeballs of space travelers.

What was the purpose the study?

Previous space missions have reported impairment of astronaut vision during extended spaceflight. It is believed that microgravity causes fluids to redistribute within our body, and this can result in physiological damage to the nervous system. This study describes what happens at the cellular level when the visual system undergoes this kind of damage.

What exactly did the researchers do?

In order to compare Earth and space conditions, scientists had two different groups of mice: one group was flown to the ISS and the other group stayed on Earth (called the “ground-control” group). After being exposed to microgravity for 35 days, the mice were sent back to Earth where they were euthanized, had their eyes collected, and their retinas (the tissue in the eye that converts light into neural signals) dissected out.

The scientists used microscopy to see whether any structural changes may have taken place in the retina, and used fluorescent stains to look for molecular markers associated with stress signals. The researchers also wanted to see if genes relating to diseases of the retina were impacted while the mice were in space, so they looked at changes in expression of those genes.

This study described a number of changes in the retina following exposure to conditions on the ISS. First, the researchers noticed that the retina shrank and grew thinner following spaceflight (see Figures 4B and 4C below). This could indicate increased cell death and loss of receptors that are important for normal visual activity. 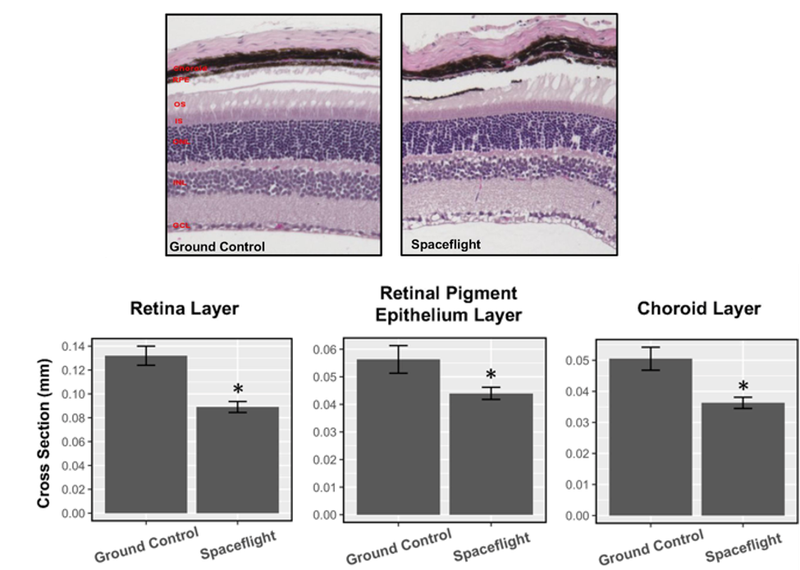 Looking at the cells of the retina themselves, the researchers found evidence that the live cells remaining in the retina were under stress. They used a fluorescent stain to label a molecule called 4-HNE that is produced when cells are damaged. This molecule (labeled with red fluorescence in Figure 5C below) was more abundant in the retinal cells of space-housed mice, indicating that those cells experience more cellular stress than those of ground control mice.

These cellular changes certainly resembled eye disease. But would that resemblance extend to cells' gene expression profiles? The authors looked for genes associated with 4 eye diseases and found that the expression levels of many of those genes were influenced by space travel. In terms of its gene expression profile, the disease that "looked like" space travel the most was retinitis pigmentosa, an inherited condition in which the retina gradually breaks down, leading to loss of vision. This hints at commonalities between the progression of this disease and the changes that occur in the eye with exposure to space.

Overall, this study helps define the molecular changes that happen in the eye when astronauts experience vision problems in outer space. Moving forward, we need to tease apart which of the changes the authors observed are directly responsible for the vision problems astronauts experience, and which only happen when the eyes try to compensate for and overcome the visual damage. This will help us identify targets for drugs or other therapeutics.

We also need to figure out which of these changes, if any, are are reversed after coming back to Earth. Visual ability is crucial for daily activities and tasks — especially in space when astronauts have so many things to worry about.

Inspired by this research? Have your own idea for a follow-up study? Submit it to Genes in Space! Application deadline: April 17, 2020.
Posted in ISS Research, Finalists.

Next post
Research brief: Contrasting atrophy in space and on Earth