San Francisco, CA, July 26, 2018 – Genes in Space named a team of Minnesota high school students the winners of this year’s contest. David Li, 17, from Woodbury High School, Michelle Sung, 16, Aarthi Vijayakumar, 16, and Rebecca Li, 16, of Mounds View High School proposed an experiment to study how cells repair their DNA in space. Their winning experiment will be performed by astronauts aboard the International Space Station next year. This is the first time the judges selected a team experiment as the winner of the Genes in Space contest. 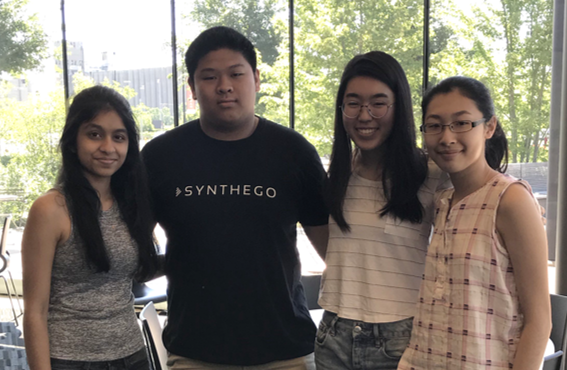 By increasing our understanding of the effect of microgravity on the mechanisms of DNA repair, the team’s project aims to protect astronauts from cosmic radiation. The experiment will utilize CRISPR/Cas9 genome editing plus DNA amplification and sequencing technology. It will be the first student-designed DNA sequencing project to be conducted aboard the ISS.

The announcement completes the fourth annual Genes in Space contest which has given students in grades 7 through 12 the chance to design experiments to solve real-life space exploration challenges through DNA analysis. The competition was founded by miniPCR and Boeing. It is sponsored by Math for America, CASIS, and New England Biolabs. The contest has launched five sets of student experiments to the ISS, including a pair of experiments in April. Research derived from the contest has accomplished numerous milestones, including the first DNA amplification experiment ever conducted in space.

The students’ winning experiment was announced today at the International Space Station Research and Development Conference in San Francisco. They were chosen from a competitive group of 559 applications from across the country. They were among five finalist teams who were invited to present their proposals before a prestigious panel of scientists, educators, and technologists at the conference. Li, Li, Sung and Vijayakumar were mentored by Woodbury High School teacher Kaarin Schumacher and MIT graduate student Kutay Deniz Atabay. The team along with their teacher and mentor will travel to NASA’s Kennedy Space Center this spring to watch their experiment launch to space.

For more information about the Genes in Space contest and all other awardees, visit: www.genesinspace.org.