Research brief: Contrasting atrophy in space and on Earth

Astronauts aboard the ISS face an exercise regimen many on Earth would consider grueling: two hours of exercise each day, every day of the week. Why is this a priority when there's so much great science to be done on board? The answer in a word: atrophy. 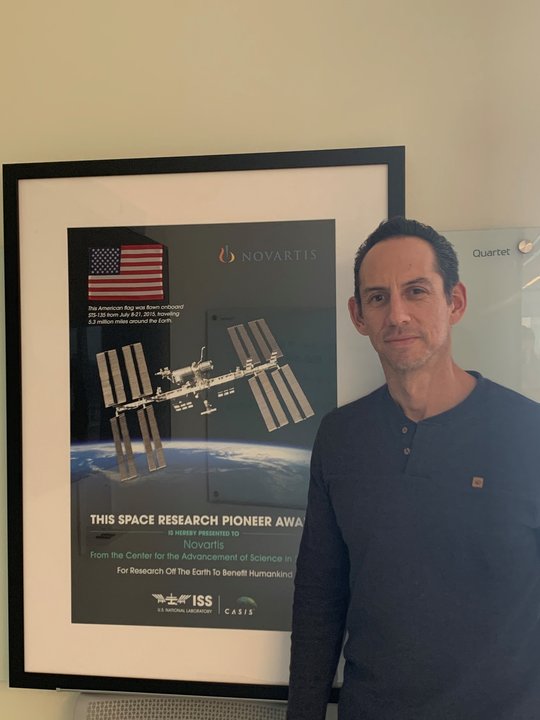 Muscles atrophy — or waste away — when astronauts don't use them regularly to resist gravity. Many space biologists are interested in better understanding the cellular processes that underlie atrophy, and Novartis' Dr. Samuel Cadena is one of them. Dr. Cadena led a recent ISS investigation on atrophy, and was surprised to find that when you observe it at the molecular level, atrophy in space appears to work differently from atrophy on Earth. He shares a peek inside this fascinating research below.

Skeletal muscle is a unique tissue as it has the ability to adapt to almost any situation. Just as an individual’s muscles can respond to exercise by getting bigger and stronger, these same muscles will become smaller and weaker (called atrophy) when exposed to extended periods of inactivity. This can occur in muscles of a broken limb placed into a cast, an individual that is bedridden (due to surgery or illness), or an astronaut in microgravity.

In cases where muscle atrophy is extreme, an individual’s ability to respond to situations where full muscle function is needed (for example, in an emergency) can be severely impaired. As astronaut missions become longer in duration, the risk for losing significant amounts of muscle mass increases. This has been observed in astronauts returning to Earth after several months on the International Space Station (ISS), despite exercising up to two hours per day while in space.

Our lab is interested in identifying genes that are involved in muscle atrophy. We hope that by developing therapies that target these genes we can counteract muscle loss and preserve strength and function in individuals on Earth and in space.

What exactly did you do?

We identified a gene that codes for a protein called Muscle RING Finger-1 (MuRF1), which appears to be very important in the atrophy process. MuRF1 protein increases during atrophy and is involved in activating the breakdown of muscle. We observed that mice that did not make MuRF1 protein were resistant to muscle loss when exposed to conditions that would normally induce atrophy. Therefore, we wanted to investigate whether this was also true for muscles exposed to microgravity. To test this, mice with and without MuRF1 were flown to the International Space Station (ISS) and housed for three weeks. At the end of the experimental period, we checked whether the absence of MuRF1 protected mice from atrophy in space to the same degree that it did on the ground.

A graphical representation of our first study. Mice with (wild-type) and without (knockout) MuRF1 were housed on the ground (black) or on the ISS (red) for 21 days.

What did you find?

To our surprise, we found that mice lacking MuRF1 showed the same degree of muscle loss as those with MuRF1. In fact, the absence of MuRF1 was actually associated with a slight trend toward losing more muscle. At this point, we realized that muscle atrophy in space was different from any type of atrophy that we had studied on the ground. We were lucky enough to be able run a second experiment on the ISS where we used only control mice (with MuRF1); housing them on the ISS for 1, 2, 4 or 8 weeks. This time course experiment allowed us to perform a thorough analysis of atrophy in space by studying both early and late stage exposure to microgravity. We analyzed muscle genes that were regulated in this setting and compared them to those involved in atrophy on the ground. We found that MuRF1 was not increased in space to the same degree as it was on the ground. Similar to MuRF1, we identified many more genes associated with ground-based atrophy that did not appear to be important in atrophy in space.

Since the results from this experiment could potentially change how we think about treating muscle atrophy in space it would be a great idea to run a separate independent experiment to see if these findings can be reproduced. If the results can be repeated, there is a risk that anti-atrophy therapies developed on the ground may not be as effective at preventing muscle loss in space. Therefore, we hope to continue to do more research in this area to understand key differences between atrophy in space and atrophy on the ground.

Dr. Samuel Cadena’s lab is dedicated to investigating factors that induce muscle loss in disease, aging and microgravity. The hope is that a better understanding of the molecular processes that drive muscle atrophy will lead to better therapies for preserving muscle mass and function in at-risk populations. Dr. Cadena has coordinated three separate experiments on the ISS and is looking forward to participating in more space related research.

Inspired by this research? Have your own idea for a follow-up study? Submit it to Genes in Space! Application deadline: April 17, 2020.

Next post
A step-by-step guide to submitting your proposal