Misquitta’s experiment explores the possibility that spaceflight-induced changes in liver function may underlie the reduced drug efficacy reported by astronauts. He hypothesizes that increased production of key liver enzymes may cause pharmaceutical drugs to be broken down before they can act on their therapeutic targets. Misquitta’s proof-of-concept experiment will establish a workflow that astronauts may one day use to test their own enzyme levels. 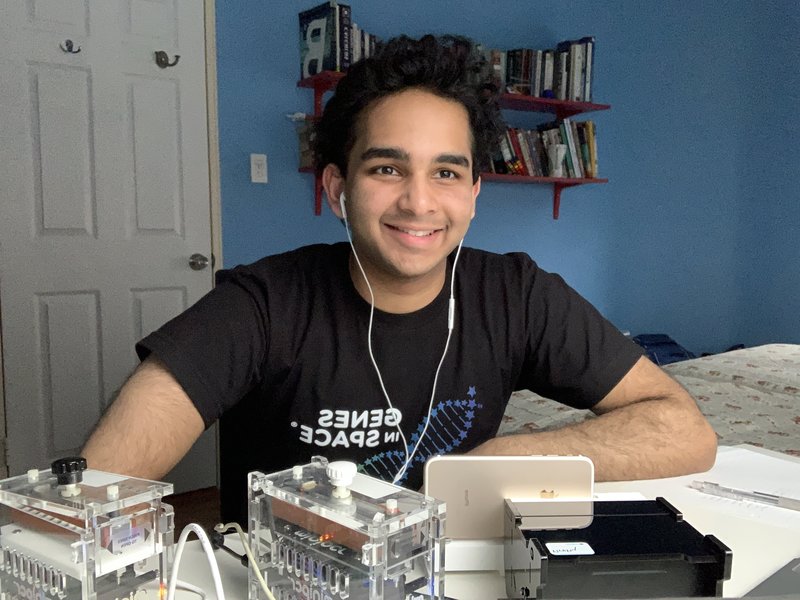 Kristoff prepares his experiment for launch

In collecting data for Misquitta’s experiment, NASA astronauts will operate the Genes in Space Fluorescence Viewer for the first time. Based on the P51Dx™, a novel diagnostic tool developed by Genes in Space founding partner miniPCR bio, the Fluorescence Viewer renders biomolecules visible to the naked eye. The instrument’s small size and safe operation make it ideal for use in resource-limited environments such as the ISS.

Misquitta hopes his project will improve our understanding of how spaceflight affects drug metabolism, and ultimately aid in the design of personalized drug regimens for space explorers on long-duration missions. His research could also lead to discoveries that enhance health care on Earth.

Misquitta, who will enroll at the Massachusetts Institute of Technology this fall, won the 2020 Genes in Space competition as a student at Stuyvesant High School in New York City. Misquitta designed his experiment with input from his science teacher, Jessica Quenzer, and his mentor, Whitehead Institute scientist Kate Malecek. In preparation for launch, the experiment was further developed by scientist Bess Miller of Harvard University.

Misquitta’s experiment will build on advances made by previous winners of the Genes in Space competition, including the first use of polymerase chain reaction (PCR) DNA replication technology in space and the first instance of CRISPR gene editing in space. Genes in Space was founded in 2015 by miniPCR bio™ and Boeing, with additional support from the ISS U.S. National Laboratory and New England Biolabs®.