2018 Genes in Space winning experiment will include DNA sequencing

For the first time, Genes in Space will include DNA sequencing in the 2018 winning experiment. DNA sequencing is a technique which allows scientists to determine the order of the DNA bases, or nucleotides, in a DNA strand. Sequencing has a number of important uses on Earth from identifying disease-causing organisms such as viruses or bacteria to determining a person's risk of developing an inherited condition. It could have many important uses in space such as monitoring crew health and investigating the effects of cosmic conditions on astronauts and other organisms. 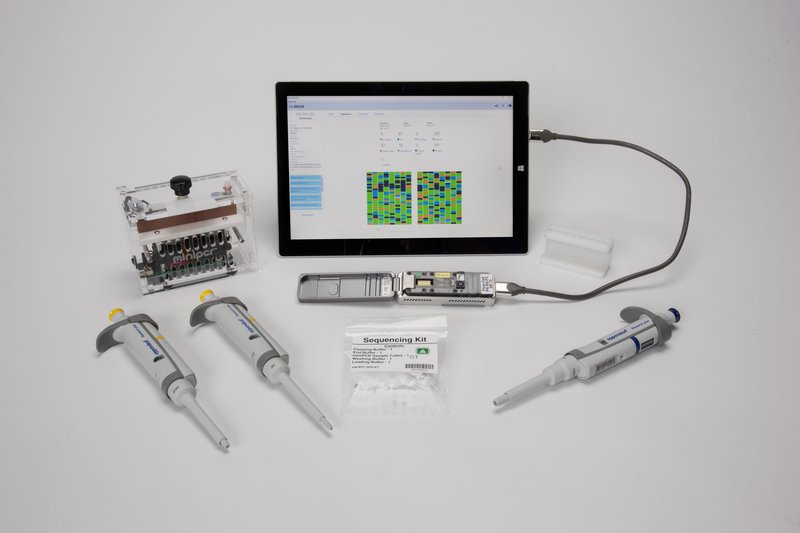 The 2018 winning experiment will contribute to ongoing efforts to perfect DNA sequencing methods in microgravity developed by a team of scientists that includes NASA’s Dr. Sarah Wallace, Dr. Aaron Burton, Dr. Kristen John, and Sarah Stahl. This team first demonstrated that DNA could be successfully sequenced in space in 2016. They have led three sequencing missions aboard the International Space Station to date. A brief summary of these missions has been provided below. 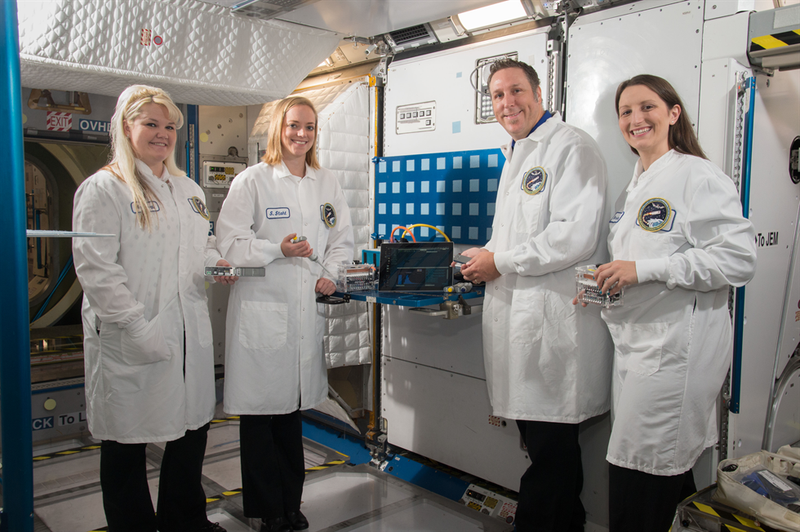 Dr. Wallace and Sarah Stahl will be collaborating with the Genes in Space team to enable the 2018 winning experiment. In June members of the Genes in Space team visited Dr. Wallace’s lab at Johnson Space Center to receive training on the sequencing methods. Dr. Wallace is also a member of the panel of judges tasked with identifying the 2018 Genes in Space winning team. “One of our primary goals in flying a DNA sequencer was to make it available to other investigators to increase science on station,” said Wallace. “We were inspired by what the Genes in Space students were proposing and couldn’t be more thrilled that a student experiment will be the first to use it outside of our team.” Sarah Stahl added, “the student contestants are asking important scientific questions pertaining to life in space and the combined use of miniPCR and the sequencer will provide key insight toward these questions.” 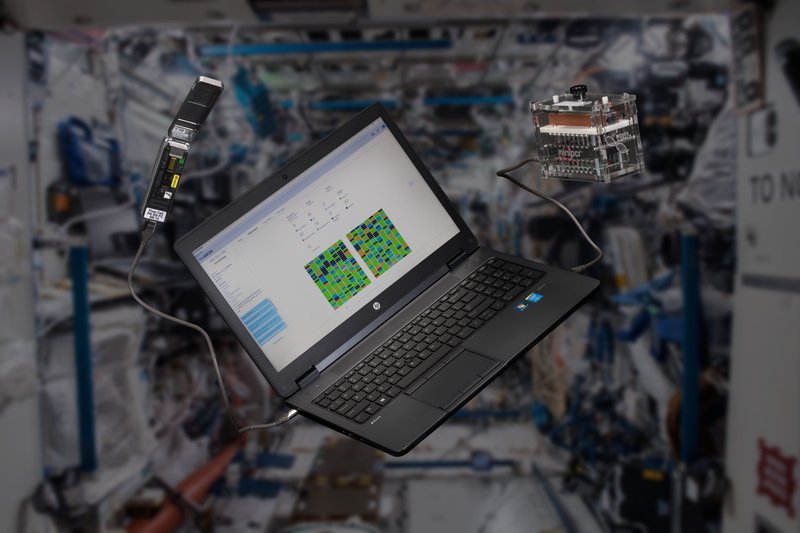 The Genes in Space team is excited to collaborate with Dr. Wallace’s team at Johnson Space Center, and by the opportunity afforded to the winning high school team to work alongside real-world space molecular biologists. "We are extremely excited to add next-generation sequencing to the Genes in Space toolkit.” Said Genes in Space co-founder Ezequiel Alvarez-Saavedra, “It will allow students to ask new types of questions and to generate large amounts of new and interesting data that will push the boundaries of research in space."

The winning team will conduct the first student-designed DNA sequencing experiment on the International Space Station. We will be posting updates throughout the year as we prepare and launch this experiment. Stay tuned! 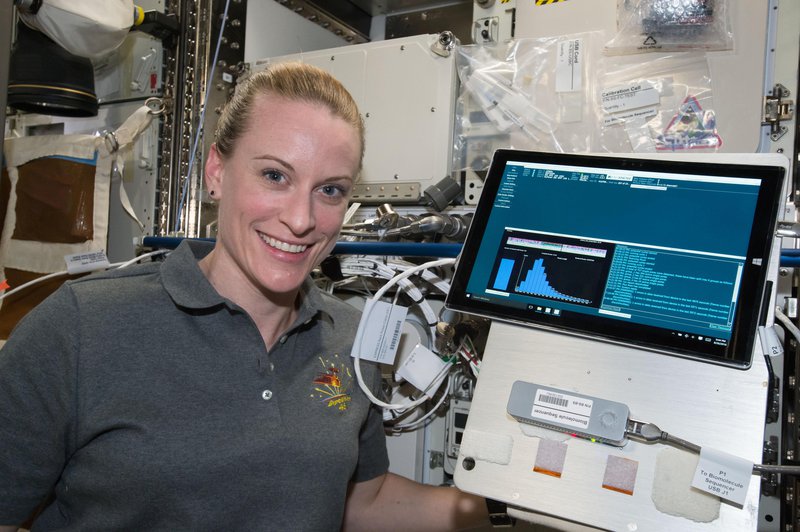 The goal of the Biomolecule Sequencer mission was to establish that DNA sequencing could work in space. The sequencing was conducted with Oxford Nanopore’s MinION, a palm-sized portable sequencing device. Samples of mouse, virus, and bacteria DNA were prepared on Earth and sent to the International Space Station (ISS) for sequencing. The team collaborated with Dr. Kate Rubins, a biologist and astronaut. Dr. Rubins performed 7 sequencing experiments on the International Space Station successfully sequencing over 275,000 DNA molecules. Identical samples were sequenced on Earth as a control. The Biomolecule Sequencer mission demonstrated that DNA sequencing was possible in space and that commercially available sequencing equipment performed as well in microgravity as it does on Earth.

After the success of the Biomolecule Sequencer mission, the next step was to demonstrate that DNA samples could be prepared in space for sequencing. The team chose to focus on the process of identifying unknown microbes. Surfaces aboard the International Space Station are routinely monitored for dangerous microbes, however, prior to Genes in Space-3, samples had to be collected, cultured, and then returned to Earth for identification. Developing a method to identify microorganisms entirely in space could improve microbial monitoring.

In order to identify microbes in a culture, the extracted DNA is often amplified, or copied, using PCR prior to sequencing. The Genes in Space-1 mission including winner Anna-Sophia Boguraev had recently demonstrated that PCR works in space using the miniPCR thermal cycler. Genes in Space-3 combined the miniPCR and MinION in the same workflow. Astronaut Peggy Whitson collected samples from inside ISS, extracted DNA, prepared it for sequencing using the miniPCR, and then performed the sequencing experiment. Several species of bacteria were successfully identified using this method paving the way for more ambitious sequencing experiments. 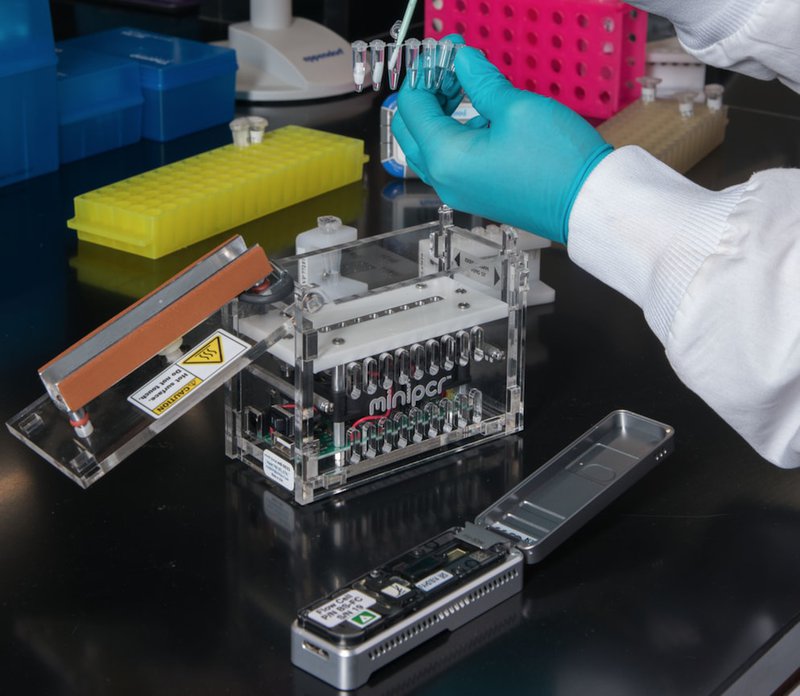 For the Biomolecule Extraction and Sequencing Technology (BEST) mission the NASA scientists will be joined by Dr. Mark Akeson, Dr. Miten Jain, and Dr. Benedict Paten from the University of California Santa Cruz. Building on the success of Genes in Space-3, the BEST experiment will seek to accomplish three goals. First, the team will test a method known as swab-to-sequencer that is similar to the methods used for Genes in Space-3 but eliminates the need to culture microbial samples before processing and sequencing them. Second, the team will attempt to sequence a new type of biomolecule, RNA, in space for the first time. Finally, the DNA sequencing protocols will be used to attempt to study the rate of mutations in bacterial genome in space. The materials for BEST arrived at the International Space Station at the end of May 2018 and experiments will be conducted throughout the summer. If successful, the BEST experiments represent a leap forward for DNA sequencing on station, from the technology demonstrations in the first two missions to actually trying to answer unknown questions about the way life adapts to the space environment.